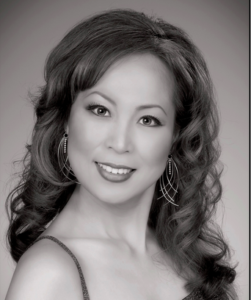 Internationally acclaimed Korean soprano Kyoung Cho has established a reputation in diverse regions of Asia, Europe, The Mid-East, and North America. Critics praised her performances as “Sublimely beautiful, transcendent, serene, dazzling, and heavenly” and “Refined tone color and dignified sound, which effectively expressed an appeal that penetrated the heart.”

As a versatile artist, her areas of specialization include Korean Art Songs, opera, oratorio, and art songs of contemporary composers. Her CD recordings on Korean Art Songs CD, published by Centaur Records and Italian Opera Arias CD, published by the Italian SonArt Records Company have been critically acclaimed in the US, Korea, and Italy. Dr. Cho was featured in an interview to introduce Korean Art Songs by “Vocal Point” on classical music station WCNY-FM 91.3, New York NPR station and this interview aired on June 28, 2014.

In addition to receiving a number of awards from national and international organizations and competitions, she received twelve research grants from USF since 2007.

Dr. Kyoung Cho is currently an Associate Professor of Voice at USF after having taught at SUNY Fredonia and at Luther College. She received her B.M. in voice from Yonsei University, one of the three most prestigious universities in Korea, M.M. at the Manhattan School of Music, followed by post-graduate studies in opera performance at Yale University. Dr. Cho completed her DMA degree at the University of Memphis, where she was the recipient of the Hohenberg-Scheidt Opera Fellowship.